One of my favorite walks on Daniel Island is from Barfield Park to the Daniel Island Sales Center.  I enjoy walking past Simmons Cemetery and love the view as you stand on the bridge overlooking the creek.  As I gaze out into the marsh, I often wonder…. what this area was in the past? So I decided to do a little research and this is what I learned.

Raven’s creek was named after the landowner, John Raven, who was granted title to this piece of property in 1737 (originally this land was part of Robert Daniell’s holdings).  John Raven received his first land grant in 1707 at the age of twenty-one. He was a planter, merchant and held several positions in the colony government. It is believed that John and his wife, Elizabeth never lived on Daniel Island and that the land was used for investment purposes.  The land would pass to their son, William Raven, whose wife eventually sold the property to Isaac Lesesne Jr. in 1766. This land was added to the tract that Isaac inherited from his father. The creek separates this tract of land from the land to the south.

The creek’s location on the Wando River made it a desirable spot for industrial activities. Raven’s Creek was navigable at low tides which was ideal for several landings that were built for the use of the movement of goods and supplies. The main focus of the creek was the mill, which was called originally called the “Daniel Island Mill”. It was run by John Sanders until it was foreclosed after only a few months.  Maurice Simon’s took over the ownership of the mill and it was renamed “Simon’s Rice Mill”.  The mill was located near the mouth of the creek.

Advertisement posted by John Sanders in The Charleston Times, 1815:

The above mill on the Wando River is now ready to receive ROUGH RICE to be pounded on Toll.  For terms, apply in Charleston, at the Counting House of C. D. Deas, or at the Mill

In 1815, The Charleston Times newspaper stated that “the tract contains an excellent Mill Pond, (and) is said to be one of the most valuable seats for a mill in this state and has on it a large Machine for pounding rice.”

Water was used to power the mill to pound the rough rice. This type of mill was introduced into South Carolina by an Englishman, John Lucas.  By 1797, Lucas had built 25  water-powered  rice mills along the coast of South Carolina.  John Drayton, in his 1972 book, A View of South-Carolina, As Respects Her Natural and Civil Concern would explain how a water-powered mill worked:

“ The rice field banks, in this case, form reservoirs (or ponds) for the mills; into which the floodtide is introduced, through locks or flood gates, which that of themselves with the turn of the tide. And as soon as the ebb tide has made about two or three hours, the mill commences its operations and works until a quarter flood or more.”

The mill would operate from 1813 until 1822 when it was severely damaged by a hurricane. It would not be rebuilt because technology had changed to “steam power” therefore eliminating the need to locate the mills along the water. 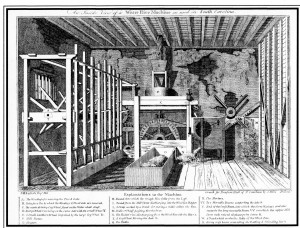 An illustration of a water-powered rice pounding machine used in South Carolina originally from John Drayton’s 1808 history of South Carolina (above). 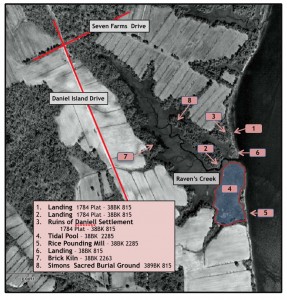 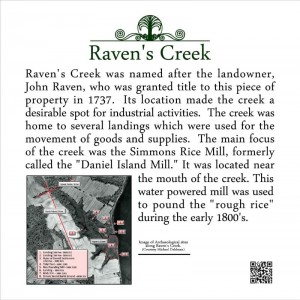