Fairbank Plantation began as two tracts given to Mary Morgan (140 acres) and Robert Daniell (105 acres) by the Lords Proprietors. In 1732, the property was sold to the Walker brothers and was called Fairbank at some point after that.  Their neighbor to the south was the Lesesne Plantation.  The two families became very close due to the limited number of plantations and people in the area.  Their children would intermarry and own this property among themselves until 1798.

A home on this site was described  in 1777 as “a good dwelling house, with 6 rooms, and every necessary out building, a large garden in excellent order, an orchard with great variety of choice fruit trees, 14 acres of corn, and about 3 acres of potatoes planted, all under a good fence.”  South Carolina Gazette, June 9, 1777

Throughout Colonial times, the plantation had two main commodities. First, was naval stores, which are goods used in building and maintaining ships.  Pine trees found on Daniel Island provided an excellent source for resin, tar, cordage and pitch. These products were used to build boats and to keep them afloat. A cotton cord would be soaked in pitch and placed between the seams of the planks on a ship’s hull, while tar was used to preserve exposed wood and riggings.  During archeological digs on Daniel Island, two tar pits were found near the Family Circle Tennis Complex and two additional pits have been discovered on Bellinger Island.

The second main crop at Fairbank was Indigo. This cash crop was grown in the Carolina Colony early as early as 1706 but wasn’t produced on a commercial scale until the mid 1740’s.

Growing, harvesting and producing Indigo was a very labor-intensive procedure.  The plant must be harvested at the proper moment so that the vivid color is at its best. The extraction process was an intricate 4-step procedure in which the first phase required round the clock supervision. On top of that, the smell was unbearable.

“The stench of the work vats, where the indigo plants were putrefied, was so offensive and deleterious, that the ‘work’ was usually located at least one-quarter of a mile away from human dwellings. The odor from the rotting weeds drew flies and other insects by the thousands, greatly increasing the chances of the spread of diseases. Animals and poultry… likewise suffered, and it was all but impossible to keep livestock on, or near, the indigo manufacturing site.” –Kenneth H. Beeson, Jr…Indigo Production in the Eighteenth Century

Other issues, such as exposure to direct sunlight, which causes the color to fade and reduces the value of the crop, were critical for planters. Great attention had to be paid to the smallest details.

Even with all of this, Daniel Island planters were very interested in growing this crop on their plantations. “Indigo was the most important vat dye used by the British in the eighteenth century” and the sandy soil of Daniel Island was well suited for the crop.   A planter, who invested in rice production, could also have Indigo fields. It was a good complement to rice since the growing season of Indigo was shorter than that of rice, and most of the intense work came during the ‘down’ months of rice production.  By 1755, the southern colonies were producing over a million pounds of Indigo a year.   It was a highly successful crop for about fifty years until after the American Revolution when the loss of the British bounty “incentive” and competition contributed to the end of Indigo production in South Carolina. 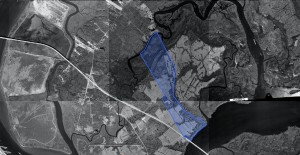 1803 survey of Fairbank Plantation, done in preparation for sale to Paul Pritchard, overlaid on 1995 map (Image courtesy of Michael Dahlman) 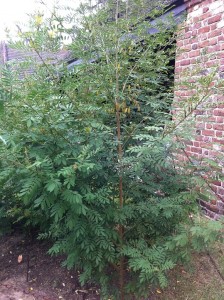